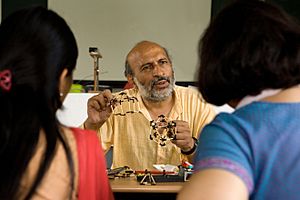 Arvind Gupta is an Indian toy inventor and expert in science. He got the civilian award "Padma Shree" on the eve of Republic Day, 2018. A graduate from IIT Kanpur (1975 batch), Arvind Kumar Gupta took a year's study leave from TELCO (in 1978) to work with the grassroots village science teaching programme for children in the tribal district of Hoshangabad, Madhya Pradesh called Hoshangabad Science Teaching Programme. While there, he developed many useful low-cost teaching/science teaching aids using locally available materials. The possibilities of using ordinary things for doing science and recycling modern junk into joyous products appealed immensely to children.

Arvind Gupta's first book, Matchstick Models and other Science Experiments, was translated into 12 Indian languages by various Popular Science groups and sold more than half a million copies. Gupta has conducted workshops in over 2000 schools and has won many national and international awards. As a student in the 1970 s in Indian Institute of Technology, Kanpur, Gupta became a socialist in belief but eschewed action-less discourse; he stated that instead he "placed more faith in small positive action than empty rhetoric." Gupta began his social service by teaching the children of the mess staff who had no opportunities for formal education.

Gandhian in outlook, Arvind Gupta participated in the Hoshangabad Science Teaching Programme (HSTP) in Madhya Pradesh in 1978. While he was there he developed his idea of creating simple toys and educational experiments using locally available materials as well as items usually thrown as trash. These simple toys, he found, fascinated children and Gupta went on to make these as the hallmark of his movement of popularising science. His first book, "Matchstick Models and other Science Experiments" was reprinted in 12 languages. Gupta's website holds instructions, including short video clips on YouTube, in a number of languages, for making hundreds of improvised toys, which he makes available freely without copyright restrictions. Gupta draws inspiration from a number of people, including Gautama Buddha, George Washington Carver and his mother.

His popular TED Talk: Turning Trash into Toys for learning gives an insight into his work and philosophy. This talk was among the 10 best TED talks compiled by Sir Ken Robinson and Sugata Mitra's 5 favorite education talks.

He has won several awards for his lifelong efforts at popularizing science and in designing teaching aids for young children. These include:

Arvind Gupta has translated over 290 books to Hindi.

All content from Kiddle encyclopedia articles (including the article images and facts) can be freely used under Attribution-ShareAlike license, unless stated otherwise. Cite this article:
Arvind Gupta Facts for Kids. Kiddle Encyclopedia.