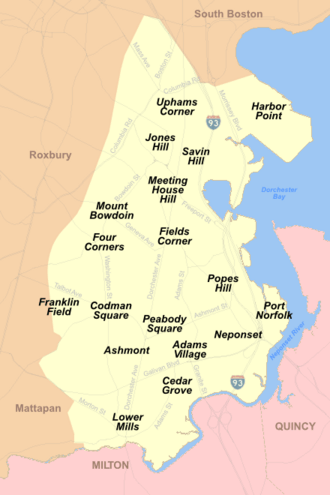 Map showing the locations of Dorchester neighborhoods, including Ashmont

Ashmont is a section of the Dorchester neighborhood of Boston. It includes the subsections of Ashmont Hill, Peabody Square, and Ashmont-Adams. Located near the Milton/Boston border, major streets include Ashmont Street, Gallivan Blvd., and Dorchester Avenue.

The MBTA has Red Line direct subway service to Downtown Boston, Harvard Square and other Cambridge locations (and ultimately to Alewife Station) at the Ashmont station and there is a link to the Ashmont–Mattapan High Speed Line trolley going to Mattapan.

All Saints Church, an Episcopal Church in Ashmont was designed by the architect Ralph Adams Cram and dedicated in 1892. It is listed on the National Register of Historic Places.

All content from Kiddle encyclopedia articles (including the article images and facts) can be freely used under Attribution-ShareAlike license, unless stated otherwise. Cite this article:
Ashmont, Boston Facts for Kids. Kiddle Encyclopedia.