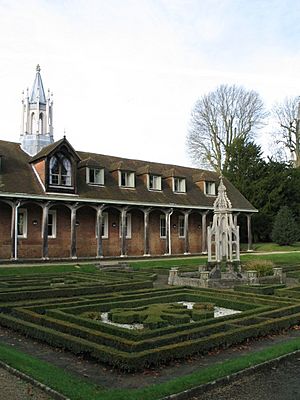 Ashridge Priory was a medieval abbey of the Brothers of Penitence. It was founded by Edmund in 1283 who donated, among other things, a phial of Christ's blood to the abbey. It was granted to Mary Tudor, Queen of France and later became the private residence of the future queen Elizabeth I. It was acquired by Sir Thomas Egerton in 1604 and then passed down to the Duke of Bridgewater before being demolished.

In 1283 Edmund, son of Richard, Earl of Cornwall holders of Berkhamsted Castle (two and half miles away) founded a monastery at Ashridge, Hertfordshire. The monastery was built for a rector and twenty canons who formed, according to the sixteenth-century historian Polydore Vergil, "a new order not before seen in England, and called the Boni homines". It was finished in 1285.

At the foundation of the abbey the Edmund, 2nd Earl of Cornwall donated, among other things, a phial of Christ's blood, in honour of which the St Margaret's Convent, adjacent to the abbey, was founded. This relic was perhaps not so well known as the Holy Blood which the Earl of Cornwall donated to Hailes Abbey in Gloucestershire, but it proved fruitful for the abbey and convent. Pilgrims from all over Europe flocked to see the phial and the abbey grew quite wealthy as a result of their donations.

One such visitor was King Edward I. In 1290 he held parliament at the abbey while he spent Christmas in Pitstone.

The last rector was Thomas Waterhouse, who surrendered the house to Henry VIII. The building ceased to be used as an abbey shortly afterwards.

The suppressed college was granted first to the king's sister Mary Tudor, Queen of France, a daughter of Henry VII. It later became the private residence of the future queen Elizabeth I. It was here that she was arrested in 1554, under suspicion of treason during Wyatt's rebellion.

In 1604 the priory was acquired by Sir Thomas Egerton. A descendant of his, the Duke of Bridgewater, demolished the old buildings in the 1760s.

All content from Kiddle encyclopedia articles (including the article images and facts) can be freely used under Attribution-ShareAlike license, unless stated otherwise. Cite this article:
Ashridge Priory Facts for Kids. Kiddle Encyclopedia.