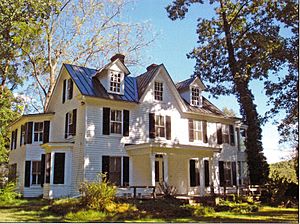 Ashton is an unincorporated community in Montgomery County, Maryland, United States. The commercial center of Ashton lies at the junction of Route 108 (Ashton Road) and New Hampshire Avenue (Route 650). The etymology of Ashton is unclear, as some longtime residents claim that it comes from reference to a large ash tree that stood at the junction of routes 108 and 650. Others have stated that it is a portmanteau of the names of two Thomas family homes, Ashland and Clifton, each located one mile from the junction.

The United States Census Bureau combines Ashton with the nearby community of Sandy Spring to form the census-designated place of Ashton-Sandy Spring, and all census data are tabulated for this combined entity.

A new village shopping center was planned to begin construction in 2006 at the corner of Route 108 and New Hampshire Avenue, where the current Sandy Spring Bank offices are located, consisting of about a 7 to 10-acre (40,000 m2) plot. It would possibly be anchored with a grocery store, as yet undetermined. Opinions vary on the effects of the plan on Ashton. As of 2013, construction has not begun.

All content from Kiddle encyclopedia articles (including the article images and facts) can be freely used under Attribution-ShareAlike license, unless stated otherwise. Cite this article:
Ashton, Maryland Facts for Kids. Kiddle Encyclopedia.