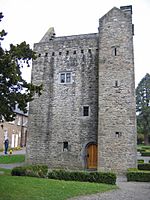 It is not clear when the castle was first built. It might date back as far as 1430. The roof dates from the 17th century.

In 1978, the building was in bad shape. It could not be repaired. When they started to break down the building, they found the towerhouse inside the bigger building. It was restored to its old form.

All content from Kiddle encyclopedia articles (including the article images and facts) can be freely used under Attribution-ShareAlike license, unless stated otherwise. Cite this article:
Ashtown Castle Facts for Kids. Kiddle Encyclopedia.