The Assiniboine Park Zoo has been best known for decades for its polar bear exhibit, of which the old enclosure was replaced in 2013 with Journey to Churchill.

The City of Winnipeg Parks Board purchased some native animals including deer, bison, and elk to start the zoo in 1904. In 1908, the bear enclosure was built, and by 1909, the zoo had 116 animals of 19 species.

The zoo got its first lion, a female, in 1935, and its first polar bear, a wild orphaned cub named Carmichael, in 1939. Carmichael got a partner in February 1940—a female named Clementine.

The Zoological Society of Manitoba was formed in 1956 to provide the vision and funding for the zoo. In 1957, the zoo helped develop "Aunt Sally's Farm", a children's petting zoo named after Sally Warnock, and which a scale model had been presented in February 1958 and opened Friday August 7, 1959. At first an admission fee of 10 cents for children over 5 and 25 cents for adults was charged. The fee was dropped years later. In 1959 the zoo was officially named Assiniboine Park Zoo.

In the 1960s, the gibbon/monkey house was built, another orphan polar bear cub arrived at the zoo, and a snow leopard was added to the zoo. The Polar bear enclosure was renovated in 1967, adding an upper story, and two more orphaned cubs arrived. Then in 1968 and 1969, the Tropical House, Native Animal Exhibit, and a new south gate were added.

In the 1980s, the Zoological Society of Manitoba, which had not been active for a while, began to provide money for new signage, exhibits, and infrastructure. The main entrance was reconstructed to include a new Gift Store operated by the Society of, and the Carousel Restaurant was renovated.

New enclosures for the camels, yaks, and zebras, as well as the "Camel Oasis" Interpretive Playground, opened in the northwest end of the zoo in 1995. This was also the first year for "Lights of the Wild," featuring animal light sculptures presented by the Zoo and the Society for 3 weeks in the winter.

In 1997, the "Saturn Playground" was constructed and the main restaurant facilities were renovated. The Saturn Shuttle and Kiosk information booth projects were established in 1998, as well as an upgrade to the electrical infrastructure of the Zoo.

In 2001 a grant from the DeFehr foundation funded the renovation of the unused Bison Restaurant Kiosk into the Palliser Interpretive Center, the headquarters for ICE Camp. An alliance with the University of Manitoba Summer Camps initiates "Mini U Zoo," where campers spend one week at the University and one week at the Zoo. The zoo master plan is unveiled to the public.

As late as 2000, the Zoo was open from 9 a.m. till sunset (or 9 p.m.). However, later the Zoo's hours were significantly reduced. Today the Zoo closes at 4 p.m., when most people coming home from their workplace. In July 2015 the Zoo extended visiting hours every Wednesday till 8 p.m. as a trial because there were many requests from zoo visitors that the earlier closing wasn't convenient for people who work during the day.

In 2004, as part of venture with the University of Manitoba Architecture Department, substantial improvements were made to the Education Centre.

The Zoo's newest permanent area, Journey to Churchill is an exhibit representing various habitats of northern Manitoba. The town of Churchill, on the Hudson Bay in northern Manitoba is home to the largest polar bear denning area in the world.

Located inside the Journey to Churchill exhibit, the Tundra Grill is a 150-seat restaurant with views of the largest of three polar bear habitats in the exhibit. 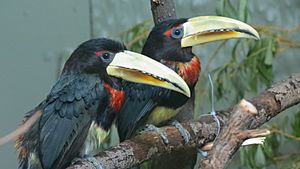 In 2009, the Zoo contracted with demolition company Klassen Concrete to demolish the early 1970s Tropical House. Instead of demolishing the building, a plan to reuse most of the building but to reconfigure the displays was put into place. Infrastructure renewal cost $900,000. Exhibit renewal cost $2.1 million. The project took five months to complete.

On April 20, 2011, the first new exhibit as part of the Assiniboine Park Zoo's redevelopment plans, Toucan Ridge, is opened. The exhibit features animal, bird, and plant life of the new world tropics of Central and South America. Toucan Ridge is located in what used to be known as the Tropical House.

Announced in November 1986, and originally planned to open in the fall of 1987, the Centre broke ground in June 1988. The $1.75 million 743 m2 (8,000 sq ft) Kinsman Discovery Centre opened on March 23, 1990, two and a half years late and $550,000 over budget. It replaced the aging Aunt Sally's Farm which operated between 1959 and 1989. The Centre contains six galleries pertaining to different life forms — water, grasslands, air, underground, plus two forest galleries. A statue honouring Winnipeg the Bear (the bear that was made famous as Winnie-the-Pooh) was unveiled in 1992 and has since been relocated to the Nature Playground, in the general Park area.

In June 2010, the Pavilion of Lions is opened. A pair of African Lions becomes the exhibits first residents.

In April 2012, the Assiniboine Park Zoo becomes the only facility in North America that is home to a pair of Asiatic lions. The Asiatic Lions replace the African Lions in the Pavilion of Lions exhibit.

A new 2,400 m2 (26,000 sq ft) expansion of the enclosure for Siberian tigers was constructed in 2013 and opened that same year. The new enclosure would assist the breeding program.

After Journey to Churchill opened in 2014 it was thought that a Wolf exhibit would be nice addition to the Zoo. Originally a wolf exhibit was not planned for. It opened in June 2018 and features four male grey wolves and one female grey wolf.

Stingray Beach is a rotating exhibit that debut on the May 2019 long weekend. However after a month and a half three male specimens died from undetermined causes.

In June 2009, the 200 m2 (2,200 sq ft) Shirley Richardson Butterfly Garden, located next to the Toucan Ridge exhibit, opened. The Butterfly Garden is a permanent seasonal exhibit and is closed during the Winter months.

The Zoo Lights Festival is the current special event that takes place between the late fall and early winter months since 2019.

A special Australian exhibit featuring koalas from the San Diego Zoo was created in 1993, and was open to the public between May 12 and September 19, in the former Aunt Sally's Farm space. This enclosure has been used for Matchie's tree kangaroos since the koalas left.

Boo at the Zoo was started in 1996 as a Halloween event. In the first year, 40,000 people attended over a ten-day period. By its 10th anniversary in 2006, when the Pumpkin Patch Maze, Area 54 and Boo Alley were added to the attractions, the event was attended by 57,400 visitors. 'Boo at the Zoo' is no longer being offered.

Lights of the Wild, featuring animal light sculptures presented by the Zoo and the Society, was first opened in 1996 for 3 weeks in the winter. It was discontinued in 2000 and the lights were all sold to Portage Island of Lights.

A temporary exhibit, Xtreme Bugs, was featured at the Zoo during the summer of 2018.

Since its inception, the Zoo had been free. Various attempts at raising funds (beyond taxpayer funds) had been tried, including coin boxes inside the Zoo, a gift shop. By 1993 it was decided to start charging an admission fee for zoo maintenance, and upgrading/expansion of exhibit spaces.

In 2015, the Zoo had offered discount Tuesdays at the cost of $10 for adults. However in that year the admission fee was raised to $12 per adult.

As of 2019, admission fees for visiting the Assiniboine Park Zoo are:

The zoo hosts summer day camps for children of all ages.

In September 2014, the Assiniboine Park Zoo becomes one of only five Canadian zoos to be accredited by the Association of Zoos & Aquariums.

All content from Kiddle encyclopedia articles (including the article images and facts) can be freely used under Attribution-ShareAlike license, unless stated otherwise. Cite this article:
Assiniboine Park Zoo Facts for Kids. Kiddle Encyclopedia.