The Chief Justice is in charge over the High Court, but carries only one of the 15 votes in the court.

Until 1973, only men were appointed as Associate Justices to the Court. Cecilia Muñoz-Palma, an appointee of President Ferdinand Marcos, was the first woman to sit on the Court.

Since then, 15 other women have been appointed as Associate Justices of the Supreme Court. 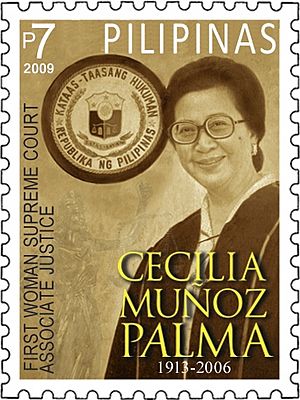 All content from Kiddle encyclopedia articles (including the article images and facts) can be freely used under Attribution-ShareAlike license, unless stated otherwise. Cite this article:
Associate Justice of the Supreme Court of the Philippines Facts for Kids. Kiddle Encyclopedia.