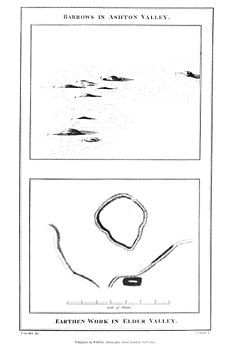 A pencil sketch showing, in the upper plate, the original arrangement of the barrows, from The Ancient History of Wiltshire, by Sir Richard Colt-Hoare, 1810 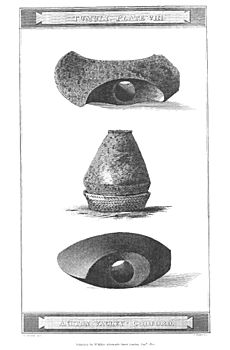 A pencil sketch showing some of the artefacts found within the barrows at Ashton Valley, from The Ancient History of Wiltshire, by Sir Richard Colt-Hoare, 1810

Excavations at the barrows have revealed many Bronze Age and some possible Saxon urned cremations and other interments. The barrows were originally excavated by W.F. Cunnington in 1801, and recorded by Sir R. Colt-Hoare, with later excavations by the Reverend E.H. Steele in 1957; and with further correlations by Leslie Grinsell, also in 1957. Some burials and items were left in place by Cunnington, but others are now preserved at the Wiltshire Museum in Devizes.

The excavations by Colt-Hoare and Cunnington in the 1800s revealed most of the finds and interments. However, as the three-age system had not yet been introduced, and they were unable to properly date their finds, they were at a disadvantage when trying to interpret them.

The following table includes details for the eleven barrows and associated finds:

All content from Kiddle encyclopedia articles (including the article images and facts) can be freely used under Attribution-ShareAlike license, unless stated otherwise. Cite this article:
Aston Valley Barrow Cemetery Facts for Kids. Kiddle Encyclopedia.