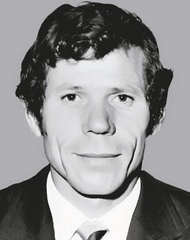 Atanase Sciotnic (1 March 1942 – 5 April 2017) was a Romanian sprint canoeist. He was a member of Dinamo Bucharest. He was born in Tulcea County, Romania.

Sciotnic took part in the two-man and four man events at most major competitions between 1963 and 1974 and won two Olympic and nine world championships medals, including four gold medals.

All content from Kiddle encyclopedia articles (including the article images and facts) can be freely used under Attribution-ShareAlike license, unless stated otherwise. Cite this article:
Atanase Sciotnic Facts for Kids. Kiddle Encyclopedia.