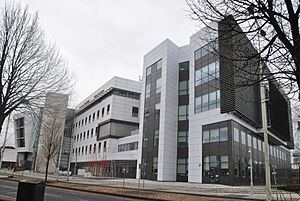 The ATRiuM building in January 2017

Atrium (styled as ATRiuM), officially ATRiuM: Cardiff Faculty of Creative and Cultural Industries and also known as ATRiuM Building, forms part of the Cardiff campus of the University of South Wales, along with Atlantic House in Tyndall Street. It is located in the Adamsdown area of Cardiff city centre, Wales. The building was first opened as a university building by the University of Glamorgan on 29 November 2007. A new extension (ATRiuM 2A) added in September 2014 and second (ATRiuM 2B) in 2016. 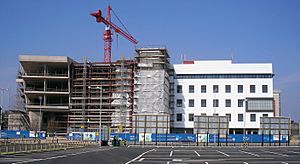 Phase 1 during construction in April 2007

Opened on 29 November 2007, it is home to one of the University's five faculties, CCI (the Cardiff School of Creative & Cultural Industries). The building is located on 86-88 Adam Street, near Cardiff Queen Street railway station.

The building comprises a refurbished former BT office block, Enterprise House, and an extension, linked by a glass atrium. It houses many of the facilities which were formerly based at the campus in Trefforest. These include a television studio, two tiered theatre, auditoriums, sound studios, learning resource centre and gallery.

ATRiuM's official launch was compered by actress Siân Phillips and TV presenter Rhodri Owen and there were performances from harpist Catrin Finch and singers Elin Manahan Thomas and Daisy Blue, who was accompanied on the piano by her father Mal Pope.

Phase 2A during construction in May 2014

Phase 2B during construction in Dec 2015

ATRiuM has expanded on the western side of the original structure (phase 1) on un-used land on the eastern side and the site of an old garage on the western side. The new two storey ATRiuM 2A includes part of the Business School, as well as a Students Union bar and an 'Ideas factory'. It opened for the new term in September 2014. The eastern side ATRiuM 2B, will be a five storey building with new teaching facilities.

All content from Kiddle encyclopedia articles (including the article images and facts) can be freely used under Attribution-ShareAlike license, unless stated otherwise. Cite this article:
Atrium, Cardiff Facts for Kids. Kiddle Encyclopedia.