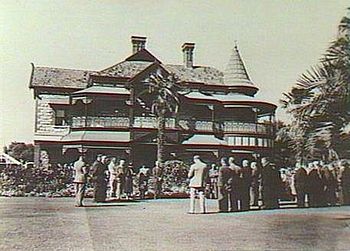 The official handover of "Attunga" by Otto von Rieben to the City of Burnside. 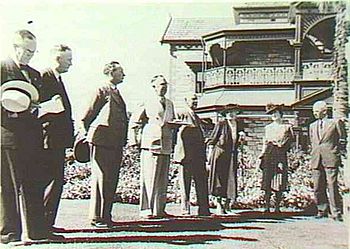 Attunga was a mansion which now forms part of a hospital.

The mansion was built by Benjamin Burford in 1900 on 4.5 acres (1.8ha) at 120 Kensington Road, in what was then Rose Park, (an inner eastern suburb of Adelaide, South Australia). Containing 14 rooms, the two storey house is the largest and most extravagant mansion built in the area that became known as the suburb of Toorak Gardens. With Burford's death in 1905, the property was bought by an investor from Broken Hill, Otto Georg Ludwig von Rieben. While maintaining and paying particular attention to the property, von Rieben eventually settled at "Pomona" at Mt Lofty in the Adelaide Hills.

All content from Kiddle encyclopedia articles (including the article images and facts) can be freely used under Attribution-ShareAlike license, unless stated otherwise. Cite this article:
Attunga, Toorak Gardens Facts for Kids. Kiddle Encyclopedia.