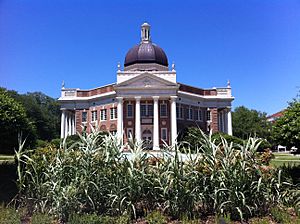 The Aubrey K. Lucas Administration Building is the most prominent building on the campus of the University of Southern Mississippi. It is named after one of the universities more popular and longest serving Presidents, Dr. Aubrey K. Lucas. The Administration building houses many various offices most importantly the Office of the President.

The building was completed in 1930.

The fountain in front of The Dome was built in 1972.

In 2005, the building was heavily damaged by Hurricane Katrina. Since then, the copper panels have been replaced on the dome portion of the building, restoring it to its original look, before the copper slowly turned to green over time after oxidation.

An estimated two-year, $2.55 million renovation of the building's foundation and exterior details began in September 2015.

All content from Kiddle encyclopedia articles (including the article images and facts) can be freely used under Attribution-ShareAlike license, unless stated otherwise. Cite this article:
Aubrey K. Lucas Administration Building Facts for Kids. Kiddle Encyclopedia.