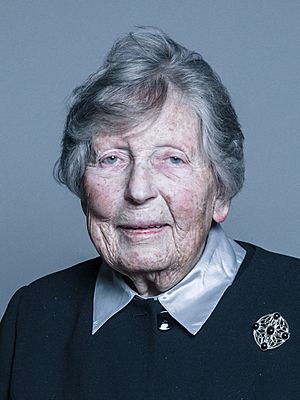 She was appointed a Dame Commander of the Order of the British Empire in the 1989 New Year Honours. She was created a life peer as Baroness Emerton, of Tunbridge Wells in the County of Kent and of Clerkenwell in the London Borough of Islington on 17 February 1997.

All content from Kiddle encyclopedia articles (including the article images and facts) can be freely used under Attribution-ShareAlike license, unless stated otherwise. Cite this article:
Audrey Emerton, Baroness Emerton Facts for Kids. Kiddle Encyclopedia.