Kids Encyclopedia Facts
Not to be confused with Audrey Jackson.
For the literary agent, see Audrey Wood (literary agent).

Wood's first memories of storytelling were in Sarasota, Florida, where her father was employed by Ringling Brothers Circus, commissioned to repaint the big top and sideshow murals. As Audrey became friends with the characters of the circus, she heard stories about them from the family of "little people" who lived next door to her family. She was the first of three girls. As the oldest, she began her gift of storytelling with her younger sisters. She would use her parents' art books and make up stories about the paintings. By the time she was in fourth grade, her ambition was to become an author/illustrator.

Wood uses children's literature to practice art, music, drama, dance, and writing. Her work creates a sense of imagination and excitement. She loves step-and-repeat stories for the "music of language". An example of this would be her famous book, The Napping House.

Her husband, Don, is the illustrator of many of her books, including King Bidgood's in the Bathtub. They began collaborating on children's literature seven years after their marriage, their first book together entitled Moonflute. Since its publication, Don has illustrated nearly 20 of her books. Their son, Bruce Robert Wood, was also an illustrator, which makes art a fifth-generation tradition in the family.

In an interview conducted by publisher Harcourt with them, Wood was congratulated on her success in publishing children's literature. The Napping House was being celebrated for its twentieth year in publication. Being asked how writing evolved her relationship with Don, she responded, "I read him a children's book during our honeymoon." She also said that even though always interested in children's books is wasn't until Bruce was born that she was pushed into action. Don did not care for the illustrations in her first book when it was published in England, and he did the illustrations in her book Moonflute when it was published in the United States. He has been hooked on illustrating children's books ever since. 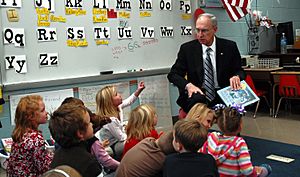 All content from Kiddle encyclopedia articles (including the article images and facts) can be freely used under Attribution-ShareAlike license, unless stated otherwise. Cite this article:
Audrey Wood Facts for Kids. Kiddle Encyclopedia.