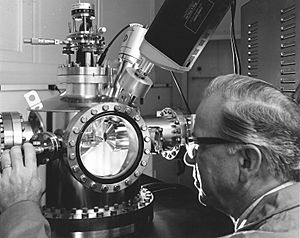 A Hanford scientist uses an Auger electron spectrometer to determine the elemental composition of surfaces.

Auger electron spectroscopy is a way of telling what chemical elements are at the surface of an object.

When an electron is removed from a core level of an atom, a higher energy level electron may fall in the vacancy. If the energy released by the fall is transferred to another electron, the latter (called Auger electron) will be emitted from the atom, in what is called the Auger effect, after the French physicist who discovered the phenomenon, Pierre Auger. The kinetic energy levels of the Auger electrons depend on the type of the atoms from which the electrons were ejected, and the chemical environment of the atoms. AES consists of bombarding a sample with energetic electrons and measuring the energy of the Auger electrons, obtaining a spectra that can be used to get information about the identity and environment of the emitting atoms.

All content from Kiddle encyclopedia articles (including the article images and facts) can be freely used under Attribution-ShareAlike license, unless stated otherwise. Cite this article:
Auger electron spectroscopy Facts for Kids. Kiddle Encyclopedia.