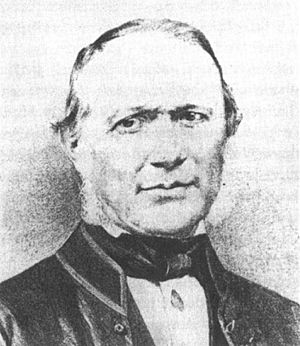 August Horislav Škultéty (August 7, 1819 – May 29, 1892) was a Slovak writer, pedagogue ethnographer and director of a first Slovak Gymnasium in Revúca. 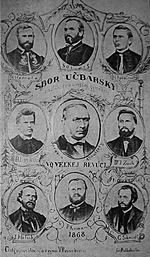 August Horislav Škultéty was born in Veľký Krtíš and attended basic school in Tisovec. In 1833–1836 he attended lower secondary school at the Evangelical Lyceum in Banská Štiavnica and graduated at Evangelical High School in Kežmarok. During 1836–1839, he studied theology at the Evangelical Seminary in Bratislava. Beginning in 1839 he was assistant of the professor Juraj Palkovič at the Department of Czech and Slovak Speech and Literature, Evangelical Seminary in Bratislava. He was a chaplain of Tisovec in the years 1841–1848, under Pavol Jozeffy's superintendency. From 1847/1848 to 1850 served as a priest in Dlhá Ves and during 1850–1861 in Rozložná. He moved to the first Slovak language gymnasium which was created in Revúca, where he worked from 1862 to 1874. In the years 1875–1891 he was a priest in Kraskovo, where he died in 1892.

During his stay in Bratislava he actively promoted the usage of Slovak language in secondary schools as well as Protestant universities. Škultéty played an important role in the development of the Department of Czech and Slovak Speech at Evangelical Seminary. During his stay in Tisovec he belonged to the founders of a public reading circle and a church library. In 1847 the Evangelical Seminary in Bratislava had been closed by Hungarian authorities. In the revolutionary years of 1848–1849, he was arrested and examined by Hungarian authorities at court in Plešivec because of his literal and political struggle for the development of the national life of Slovaks. He became a member of the committee for the establishment of the first Slovak gymnasium in Revúca, opened on September 16, 1862. He worked there as a professor of religion, and later as director. Under his guidance, the institute became an important center of Slovak education and this fact caused permanent attacks of Magyarisation school policy, which peaked in 1874, when the gymnasium was closed by the Hungarian authorities.

His literal work significantly developed Slovak literature, education and pedagogy, particularly for children and youth. In 1840, he published his collection of poetry, named Básne, as the first person from the Štúr generation.

Zábavník pre dietky was the first original literary work for children, written in Slovak language. Then in 1850 and 1855 Škultéty's two text books Rečňovanka pre Slovenskje školi were issued, which affected the patriotic, linguistic and aesthetic education in Slovak schools. He collected and transcribed Slovak folk fairy tales together with Štefan Marko Daxner and Čipka, and these were preserved in the Codex Tisovský, one of the main sources of Škultéty and Dobšinský's Slovenské povesti ("Slovak Tales", 1858–1861).

Altogether he is an author of 14 textbooks, but the vast majority of them stayed as manuscripts.

All content from Kiddle encyclopedia articles (including the article images and facts) can be freely used under Attribution-ShareAlike license, unless stated otherwise. Cite this article:
August Horislav Škultéty Facts for Kids. Kiddle Encyclopedia.