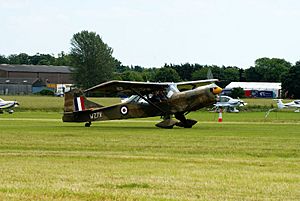 The Auster AOP.9 is a light military aircraft. It was designed and built in UK between 1955 and 1960. It was used by British Army and Royal Air Force for light liaisons and observation.

All content from Kiddle encyclopedia articles (including the article images and facts) can be freely used under Attribution-ShareAlike license, unless stated otherwise. Cite this article:
Auster AOP.9 Facts for Kids. Kiddle Encyclopedia.