The Australian Memorial Park is a World War I memorial, located near Fromelles, France commemorating Australians killed during the Battle of Fromelles.

The memorial park is located approximately 200 metres (660 ft) from the V.C. Corner Australian Cemetery and Memorial, on the same road in the direction of the village of Fromelles in France. It lies at the point where the German lines crossed the road, and has several surviving battlefield fortifications. In comparison, the V.C. Corner cemetery and memorial is approximately at the point where the Allied lines crossed the road. 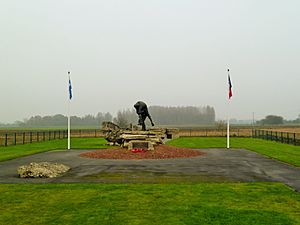 Cobbers is a prominent 1998 sculpture by Peter Corlett of Sergeant Simon Fraser rescuing a wounded compatriot from No Man's Land after the battle. A replica of the sculpture is in the Shrine of Remembrance in Melbourne, Victoria. The title comes from a letter that Fraser, a farmer from Byaduk, Victoria, wrote a few days after the battle and that was widely quoted in Australia's official history of World War I.

We found a fine haul of wounded and brought them in; but it was not where I heard this fellow calling, so I had another shot for it, and came across a splendid specimen of humanity trying to wriggle into a trench with a big wound in his thigh. He was about 14 stone weight, and I could not lift him on my back; but I managed to get him into an old trench, and told him to lie quiet while I got a stretcher. Then another man about 30 yards out sang out "Don’t forget me, cobber." I went in and got four volunteers with stretchers, and we got both men in safely.

All content from Kiddle encyclopedia articles (including the article images and facts) can be freely used under Attribution-ShareAlike license, unless stated otherwise. Cite this article:
Australian Memorial Park Facts for Kids. Kiddle Encyclopedia.