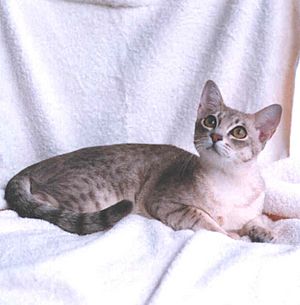 The Australian Mist (first named the Spotted Mist) is a breed of cat. The breed began in Australia, in 1976. Burmese cats, Abyssinian cats and other short-haired cats were mated to make a short-haired cat with a spotted coat. In 1998, the name was changed to "Australian Mist", when cats with marbled coats became part of the breed.

Australian Mists are medium-sized short-haired cats. They have large eyes and a short coat of fur. They do not need much brushing because they do not lose much hair. Their coat has three types of markings. First is their background solid color. It is paler than their pattern, which is spotted like a tabby. Their legs and tail have rings or stripes. Their face and neck also have lines of color. The accepted colors are blue, chocolate, lilac, cinnamon and fawn.

Australian Mists are okay with being picked up and held. They do not scratch much. When they are kittens, they have a lot of energy. As adults, they settle down to be quiet cats. They make good indoor cats. Some can be trained to go for walks with a collar and a leash.

All content from Kiddle encyclopedia articles (including the article images and facts) can be freely used under Attribution-ShareAlike license, unless stated otherwise. Cite this article:
Australian Mist Facts for Kids. Kiddle Encyclopedia.