The Australian Sailing Museum is in Mandurah, Western Australia. 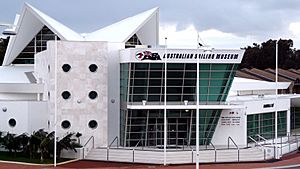 Owned and built by Rolly Tasker, the Australian Sailing Museum exhibits a comprehensive display of yacht models, the history of Australian sailing, and sailors, from the 19th century. It has maritime artworks, lifelike wax figures of sailing icons (a saluting Dennis Conner, John Cox Stevens, Sir Thomas Lipton & more), while the main exhibition area is circled with pennants from clubs around the world. The Museum also houses the Peninsula Art Gallery that sells prints, the Boardwalk coffee shop and Rolly Tasker Sails Australia which offers sails made by Rolly.

The opening address on Monday 7 April 2008 was made by Major General Michael Jeffery AC CVO MC, Governor-General of the Commonwealth of Australia.

The Governor-General opened the museum on Rolly and Kerry Tasker’s behalf.

The Museum houses an extensive array of built-to-scale model yachts in glass cases. The models are representative of most of the Australian and many international classes of yachts. The Australian sailing and Olympic sailing champions' achievements are listed. Wax figures circle the centre of the Museum while sailing history in text and pictures line the walls.

Has been listed as a 2009 WA Tourism Awards Finalist.

All content from Kiddle encyclopedia articles (including the article images and facts) can be freely used under Attribution-ShareAlike license, unless stated otherwise. Cite this article:
Australian Sailing Museum Facts for Kids. Kiddle Encyclopedia.