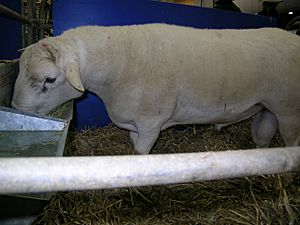 An Australian White ram at the Sydney Royal Easter Show. 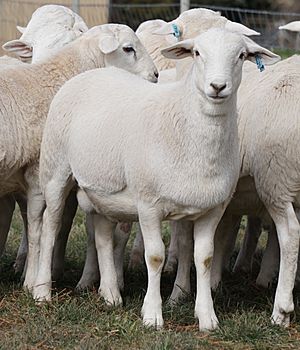 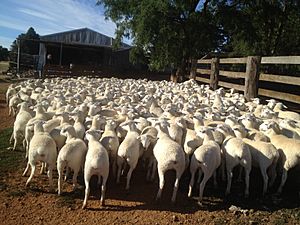 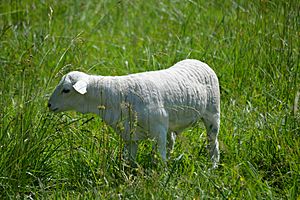 The original key objectives in developing the breed were:

The end goal was to produce lamb in a more economical and viable way, reducing costs, labor and increasing yield whilst still retaining good eating quality.

The lamb was designed to better meet the needs of large scale meat lamb producing systems without the complications that come with producing wool.

The Australian White is now recognized for its excellent eating qualities. It is a fine textured (fine grained), very soft and clean tasting meat. It is high in omegas, which is its single most distinguishing factor from other sheep breeds.

The Australian White (AW) was developed on the Tattykeel properties in Black Springs, NSW, Australia by two brothers, Graham and Martin Gilmore, over several years and was launched in 2011. Utilizing embryo transfer, artificial insemination, and selective line breeding, the “best” characteristics of the four source breeds were used to develop the AW. The original design was to be a self-replacing meat sheep that sheds its own hair, can survive in extreme weather conditions (from cold and wet to hot and arid environments), early maturing, and breed year-round. During the development of the breed its unique eating qualities were evident; however, it was not until later (November 2016) that the scientific reasons for its excellent eating qualities were discovered by Associate Professor Aduli E.O. Malau-Aduli, PhD. The AW breed can now be found all over the world in countries such as New Zealand, China, Inner Mongolia, and the United States.

The first AW embryo transfer program was done in 2010 at Tattykeel properties. Since then many programs have been conducted each year at the farm with animals going through rigorous selection to continually improve the desired traits, conformation and eating quality. 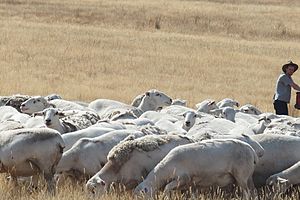 A flock of Australian White Sheep in Mudgegonga, Victoria, Australia

A typical ram will have a long, straight top line and a deep body with a solid barrel. Average ram mature weights range from 240 to 265lbs (110 to 120kg). The ram’s head is more masculine with both good breadth and depth, and his pigment tends to be slightly darker than the ewe’s. The ram’s beam shape slightly tapers near the shoulders.

A typical ewe shows good length, depth, and width as well as good twist in the hind legs for great balance. Average ewe mature weights are 150 to 175lbs (68 to 80kg). Their heads tend to demonstrate more feminine characteristics with smoother transitions across the skull.

They build a thick coat during the winter, and their hair becomes finer post-shedding during the warmer months. The AW is selected for a thick and supple hide. The density and thickness of the winter coat varies according to the weather conditions of the area in which they are being raised.

The AW matures early in life at around 10-12 months of age. Early maturing breeds are generally more efficient in terms of maintenance, breeding, and growth of lambs for slaughter. Growth rates being achieved between 16-18 weeks of age are 105-115lbs (48-52kg).

As the breed was developed to finish on grass; the lambs do not need to be grown out or finished on grain under normal conditions.

The quick turn around and reduced cost to finish the lambs is resulting in increased profit margins for commercial producers.

AWs have a quiet temperament and can have low maintenance requirements in various production systems.

The meat quality traits of the AW are the biggest distinguishing factors of the breed. Tattykeel has conducted extensive testing on the intramuscular fat (IMF) and fat melting point (FMP) of the AW. The FMP is significantly lower between 82-95°F (28-35°C) (typical lamb is 110°F/43°C) achieving a similar result to that of Wagyu beef (which generally has a FMP below body temperature 98°F/36.7°C) without the need for long term grain feeding. Traits such as IMF and FMP are indicative of the amount of the long chain omega-3 fatty acids levels and have effect on taste and tenderness. Polyunsaturated fats, in particular long chain omega-3s, are known to aid in cardiovascular health as well as many other benefits. The average AW lamb has significantly elevated levels of omega 3s when compared to other breeds and popular consumer red meats.

The AW is the exclusive breed used in the recently released Margra brand created in 2019 for distribution in the United States. The brand name combines the names, Martin and Graham, who were the two most influential developers of the Australian White breed. Margra lamb boasts premium quality and consistency of product.

Tattykeel continues to conduct research on meat eating qualities of their Australian White sheep with Associate Professor Aduli E.O. Malau-Aduli, PhD. To ensure the animals are not harmed during the testing, biopsies of the meat are taken from live animals under clinical conditions. Current testing is being used to identify the best lines of animals for eating quality and is proving that the eating quality in these animals is highly heritable.

Development of a proprietary DNA signature, correlations with omega-3 long chain polyunsaturated fatty acids, key sensory eating quality characteristics in Tattykeel Australian White sheep have been branded as a lamb product that is genetically different to other lamb breeds marketed on the basis of sensory eating quality characteristics. This project has the ability to see lamb as a protein cross over from the food industry to the health sector due to its high content of long chain omega-3.

All content from Kiddle encyclopedia articles (including the article images and facts) can be freely used under Attribution-ShareAlike license, unless stated otherwise. Cite this article:
Australian White sheep Facts for Kids. Kiddle Encyclopedia.