Australothis volatilis, also known as the fuzzweed moth, is a species of moth in the family Noctuidae. It is endemic to New Zealand. This species has been classified as critically endangered by the Department of Conservation.

This species was discovered by Brian H. Patrick in Central Otago in 1989. It was first described by him and his colleague M. Matthews in 1998.

A. volatilis is endemic to New Zealand. It has been found in only six sites in Central Otago and the Mackenzie Basin. 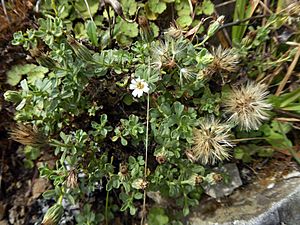 The larvae of this species feed on Vittadinia species. The natural host of A. volatilis appears to be the white fuzzweed herb Vittadinia australis. This plant is also endemic to New Zealand and is itself in need of conservation. The caterpillars of A. volatilis feed on the flowerheads, leaves and developing seeds of the plant. Larvae have also been seen feeding on the exotic species Vittadinia gracilis but it is unknown whether this plant provides the necessary nutrients to the larvae to ensure their successful maturation.

This moth is classified under the New Zealand Threat Classification system as being Nationally Critical.

All content from Kiddle encyclopedia articles (including the article images and facts) can be freely used under Attribution-ShareAlike license, unless stated otherwise. Cite this article:
Australothis volatilis Facts for Kids. Kiddle Encyclopedia.