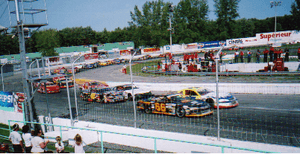 The Autodrome Saint-Eustache was a motor sport complex in Saint-Eustache, Quebec, Canada established in 1965, which contained a .40-mile paved oval and a 1.1-mile paved road course with hot pits, grandstands and services.

The oval circuit hosted NASCAR Whelen All-American Series weekly racing, with drivers racing for both the province (Quebec) and the rest of North America. Its premier event was the NASCAR Pinty's Series which raced at the track since the creation of the series. The track also formerly held CASCAR Super Series events.

All content from Kiddle encyclopedia articles (including the article images and facts) can be freely used under Attribution-ShareAlike license, unless stated otherwise. Cite this article:
Autodrome Saint-Eustache Facts for Kids. Kiddle Encyclopedia.