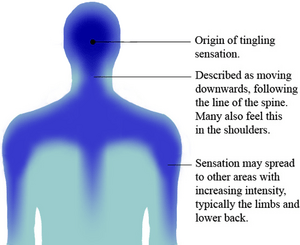 An illustration of the route of ASMR's tingling sensation

People who experience ASMR have a "low-grade euphoria" characterized by "a combination of positive feelings and a distinct static-like tingling sensation on the skin". ASMR is most commonly triggered by specific auditory or visual stimuli, and less commonly by intentional attention control. A genre of videos which intend to stimulate ASMR has emerged, of which over 13 million are published on YouTube.

All content from Kiddle encyclopedia articles (including the article images and facts) can be freely used under Attribution-ShareAlike license, unless stated otherwise. Cite this article:
Autonomous sensory meridian response Facts for Kids. Kiddle Encyclopedia.