Autwine is a ghost town in Kay County, Oklahoma, United States, formerly known as Pierceton and Virginia City. It had a post office as Pierceton from May 26, 1894 and as Autwine from March 5, 1903, until June 30, 1922. The town declined as an agricultural center after better roads in the area led to farmers taking their business to the larger business centers. Today there is nothing left of the old townsite and the area is used for agriculture.

The town was served by the Hutchinson and South Railway(Santa Fe).

The town was first called Virginia City and was platted on June 17, 1899. Its post office was named Pierceton and the railroad called the station Arta. A meeting was held to determine a single name for the town and agreed upon Autwine.

The town was an agricultural center.

At the turn of the century the town had two elevators, a stockyard, and implement yard, a bank, ten other business establishments and a doctor.

25 homes in town and more in the surrounding area.

Had a school servicing grades 1-8, with high school in Blackwell, six miles away.

As roads were improved in the early 1900s Autwine declined as a trading center.

Fire destroyed the business district in 1905, burning the grocery, dry-goods store, depot, blacksmith shop, general merchandise store, hardware store and part of the lumberyard. Only one empty business was left standing. Most of the businesses did not rebuild.

By 1910 there was only one general store, a blacksmith shop, and one elevator in business.

The school was destroyed by tornado in 1912.

Last store closed in 1930 and the elevator closed shortly thereafter.

All land from the town is now used for agriculture. Nothing is left. 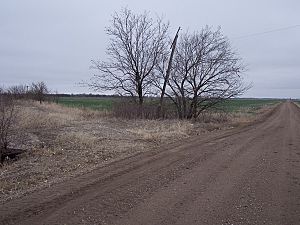 The Autwine Oilfield in Kay County is named after the city.

All content from Kiddle encyclopedia articles (including the article images and facts) can be freely used under Attribution-ShareAlike license, unless stated otherwise. Cite this article:
Autwine, Oklahoma Facts for Kids. Kiddle Encyclopedia.