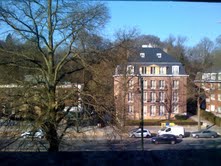 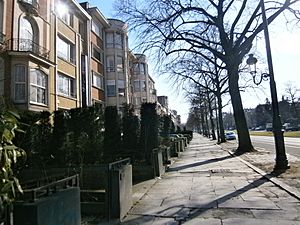 Avenue Franklin Roosevelt is a street in Brussels, Ixelles. It is next parallel to Bois de la Cambre, a forest in Brussels. Many houses there were built in the Second World War. It is known as one of the most beautiful boulevards in Brussels. The Ixelles community opposes that people build shops or hotels and apartment buildings have to be no bigger than 16 meters high. There are many embassies and residences of ambasadors located on Avenue Franklin Roosevelt.

The avenue was named "Avenue des Nations" in 1922, after Leopold II came the visit de Universal Exposition from 1910. He said it should be a residential area.

In 1945, de "Avenue des Nations" becomes Avenue Franklin Roosevelt, in honor of the president of America.

All content from Kiddle encyclopedia articles (including the article images and facts) can be freely used under Attribution-ShareAlike license, unless stated otherwise. Cite this article:
Avenue Franklin Roosevelt Facts for Kids. Kiddle Encyclopedia.