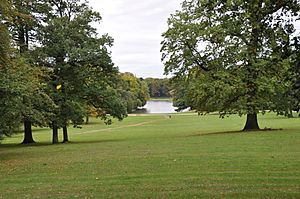 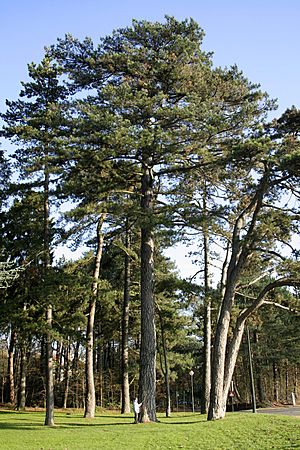 Bois de la Cambre (Dutch: Ter Kamerenbos) is a forest in Brussels. It used to be part of the Sonian Forest but now it is separate.

The main road around the lake has been closed to traffic on Saturdays and Sundays since the 1990s.

In 1815, on the eve of the Battle of Waterloo, the British soldiers played cricket on land that is now part of the Bois de la Cambre.

There is a park that includes horse rides, an ice rink, boating activities and fishing are organized. Bois de la Cambre is connected to the Sonian Forest as in the past it used to be part of it. Three entries are from the Avenue Franklin Roosevelt.

In the 1990s the Chalet Robinson was built on the an island on the lake. The restaurant was destroyed by a fire in 1991. The decision was made in 2006 to rebuild it and it reopened to the public in September 2009. An electrical boat has been made so you can pass from the shore to the island.

Two days per year there is a race, 24 hours race Bois de la Cambre that is played by the young scouts other activities are also organized for the young scouts. In 2013 the 24 hours race was canceled because of the cold, wind and rain. Other smaller events are also organized in the park. Sometimes, sports demonstrations, outdoor concerts, processions coupling, theaters animation or games for children are held during the summer. In the last week-end of August the Fiesta Latina is organized witch includes Latin food and concerts. In September an Eat festival was organized but the first two days were ruined because of the rain.

All content from Kiddle encyclopedia articles (including the article images and facts) can be freely used under Attribution-ShareAlike license, unless stated otherwise. Cite this article:
Bois de la Cambre Facts for Kids. Kiddle Encyclopedia.