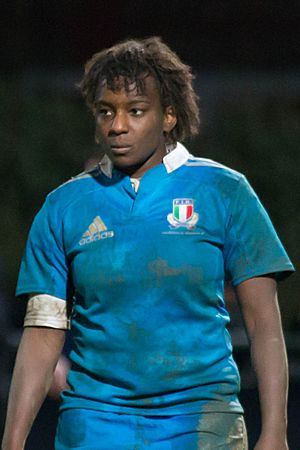 She was born in Bamako. Her father was an architect, and her mother was an interior decorator. She was raised from the age of three in Chieri, where she finished her secondary studies. She practiced various sports at school before devoting herself to rugby.

In 2013, she was one of the first group of Italian players to play in France to gain more experience, at Rennes. She attended a local university.

All content from Kiddle encyclopedia articles (including the article images and facts) can be freely used under Attribution-ShareAlike license, unless stated otherwise. Cite this article:
Awa Coulibaly Facts for Kids. Kiddle Encyclopedia.