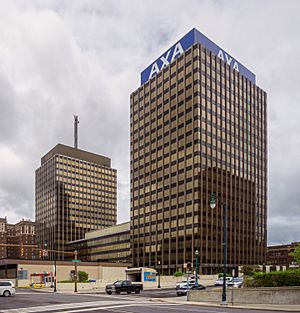 The Axa Towers are two commercial office buildings in Syracuse, New York. AXA Tower I was built in 1966 and Tower II was built in 1971, and both stand at 268 feet (81.7 meters) and have 19 floors. They are tied for the second tallest buildings in Syracuse. They were both built with a tube-in-tube structural system with a steel and glass curtain wall facade. The buildings serve as offices for New-York-based Axa Equitable Life Insurance Company, and have illuminated logos on top.

Axa Tower I, formerly the MONY Building, has a weather beacon on its roof, and a digital display of time and temperature which can be seen from the north and south sides of the building. Tower II, when built, was known as the Carrier Building. Both towers had logos of their respective companies on top of the buildings.

All content from Kiddle encyclopedia articles (including the article images and facts) can be freely used under Attribution-ShareAlike license, unless stated otherwise. Cite this article:
Axa Towers Facts for Kids. Kiddle Encyclopedia.