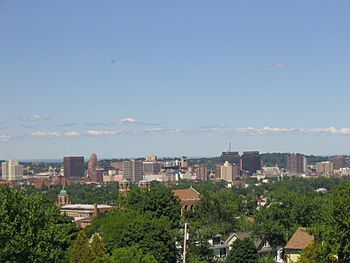 This list ranks skyscrapers in the U.S. city of Syracuse, New York, by height.

Since its construction in 1927, the State Tower Building has been the tallest building in Syracuse. There has not been a new tall building complete in the city since the 1970s and several projects for tall buildings cancelled before completion.

On October 24, 2002 the groundbreaking for a 430-foot (130 m), 47-story Destiny USA Hotel to be named the Grand Destiny Hotel was held. On that date a steel beam was driven into the Carousel Center parking lot. Over the next three weeks, over 40 more pilings were driven, but by December 2 construction had stopped. In July 2008 construction had restarted, and by August three stories of steel framework had been erected.

All content from Kiddle encyclopedia articles (including the article images and facts) can be freely used under Attribution-ShareAlike license, unless stated otherwise. Cite this article:
List of tallest buildings in Syracuse, New York Facts for Kids. Kiddle Encyclopedia.