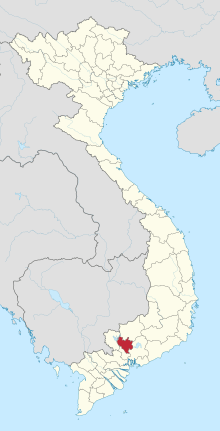 Bình Dương has traditional villages, such as wood carving, pottery and lacquer painting. Since ancient times, art pottery, lacquerware and sculpture of Bình Dương have participated in international fairs and also exported to France and many countries in the region.

When the August Revolution broke out, the province commissioned a general uprising to seize power in Bình Dương and establish a provincial People's Committee. In mid-September, the provincial People's Committee changed its name to the Provincial Resistance Administrative Committee. At the end of September 1945, the British-French alliance opened fire to recapture the South. The Democratic Republic of Vietnam in South Vietnam decides the South resistance. Implementing the policy of "dissolving" of the Communist Party of Vietnam. On 11 November 1945 the provincial Party Committee also proceeded to "dissolve", actually developing the revolutionary movement under the name Việt Minh.

All content from Kiddle encyclopedia articles (including the article images and facts) can be freely used under Attribution-ShareAlike license, unless stated otherwise. Cite this article:
Bình Dương Facts for Kids. Kiddle Encyclopedia.