B. J. Palmer facts for kids

Bartlett Joshua Palmer (September 14, 1882 – May 27, 1961) was an American chiropractor. He was the son of Daniel David Palmer (D.D.), the founder of chiropractic, and became known as the "Developer" of chiropractic.

B.J. Palmer was born on September 14, 1882, the son of Daniel David Palmer (or "D.D."), the founder of chiropractic, in What Cheer, Iowa, The Palmer family of six resided in the back of a grocery store that D.D. operated. In 1885 D.D.'s wife became sick and died, after which D.D. remarried several times. When D.D. had settled with a new wife, he moved the family to Letts, Iowa, and he worked as a schoolteacher and a magnetic healer, developing chiropractic. 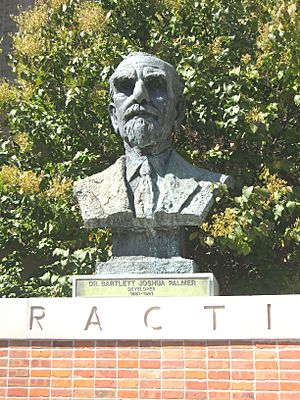 On May 30, 1904, B.J. married a woman named Mabel Heath. Both worked as chiropractors and instructors at Palmer College. Mabel Heath Palmer had a heavy load of students and taught mostly anatomy classes. B.J. Palmer ran his research clinics in Davenport for 16 years and eventually became convinced that upper cervical spine was the key to health. He modified the Palmer School of Chiropractic curriculum to reflect his new ideas. Palmer advocated the use of the Neurocalometer and X-ray machines.

On January 12, 1906, a son David Daniel Palmer was born to B.J. and Mabel Heath, and would be the couple's only child. In keeping with his educational efforts for the profession, he became known as "The Educator." They had an estranged relationship for a number of years when David Daniel decided to attend University of Pennsylvania and later its Wharton School of Business. David explained that he knew that he would one day be in charge of the school, and wanted an education in business to allow him to better manage the college. He also graduated from Palmer as a Doctor of Chiropractic.

In 1922, Palmer purchased a local radio station, WOC (whose call letters were thought to stand for "World Of Chiropractic" or "Wonders of Chiropractic" but in reality these call letters were assigned by the government to the previous owner of the station, Robert Karlowa of Rock Island, Illinois). Palmer began using the station to market chiropractic, as well as to broadcast farm, sports and weather reports. Ronald Reagan, future President of the United States and actor, was given his first broadcast job by Dr. Palmer to broadcast sports for WOC. A second station in Des Moines, WHO, ("With Hands Only" was also thought to be connected to chiropractic but was not used by the station.) WHO was purchased from Bankers Life in Des Moines in 1930. Neither station ever used the phrases in any of their promotions. Television stations were later added under the same call letters.

Following with the extensive world travels that was the trend in the 1920s, B.J., Mabel, and son David traveled through most of Asia. He later wrote a book called 'Round the World with B.J.' that would detail those trips and the people they met. He also published and read some of these stories in the Palmer School's newspaper and on WOC radio station.

Mabel Heath died in 1949 from stroke complications. In 1951 B. J. purchased a home on St. Armands Key in Sarasota Florida where he lived out his final years. He died in 1961 due to intestinal cancer. His son, David Daniel Palmer, assumed the role of President of Palmer School of Chiropractic after his father's death.

B. J. and Mabel Palmer residence

The house that B. J. and Mabel Palmer lived in is located at 808 Brady Street, Davenport, Iowa. It contains many of the souvenirs collected on their tours of the world. The Palmers added on a porch addition surrounding the original house in the 1920s to help hold their extensive collection.

B. J. Palmer's winter home in Sarasota, Florida is located at 342 No. Washington Drive on St. Armands Key. The home contains many original artifacts including his Roycroft furniture, lamp and clown collection, bedroom furniture, death certificate and a collection of framed documents.

All content from Kiddle encyclopedia articles (including the article images and facts) can be freely used under Attribution-ShareAlike license, unless stated otherwise. Cite this article:
B. J. Palmer Facts for Kids. Kiddle Encyclopedia.