BBC 2W was a digital television channel run by the BBC in Wales until January 2009. It replaced the standard BBC Two broadcast on digital services in Wales — running on weekdays from 8.30pm to 10pm. Launched on 5 November 2001, it had an initial reach of 1.1 million viewers. 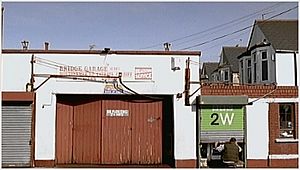 One of the channel's idents introduced in 2003, depicting the BBC 2W logo box as a garage door.

BBC 2W's original ident in 2001 was a bright green design with a stylised spinning cube that could transition directly into a programme menu. In 2003, a new set of idents debuted featuring a number of live action sequences where a green BBC 2W logo box is integrated into the scene as a physical object (such as on a beer tap or painted on a garage door), whilst still ending up in the bottom right-hand corner location like the usual BBC Two idents.

However, from 18 February 2007, BBC 2W simply used the standard BBC Two idents with the 2W box. At crossover (when BBC Two Wales became BBC 2W) the boxes alternated between each other during the ident. This alternation also occurred during trailers which advertised programmes during BBC 2W hours.

The BBC closed down BBC 2W in the run-up to digital switchover as part of plans to achieve 3% annual efficiencies at BBC Wales. Digital BBC Two in Wales reverted to the network version, with less frequent regional programmes as is the arrangement on Analogue BBC Two Wales.

BBC 2W was designed to offer "a unique experience unavailable anywhere else with the watchwords of topicality and style, intelligence with an occasional touch of irreverence, shining through" for Welsh audiences.

All content from Kiddle encyclopedia articles (including the article images and facts) can be freely used under Attribution-ShareAlike license, unless stated otherwise. Cite this article:
BBC 2W Facts for Kids. Kiddle Encyclopedia.