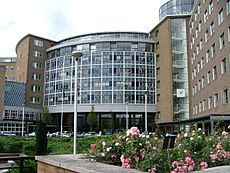 BBC Television Centre (sometimes abbreviated TVC or TC) in White City, London is home to much of the BBC's television output. Since 1998, almost all of the corporation's national TV and radio news by BBC News is made there too.

All content from Kiddle encyclopedia articles (including the article images and facts) can be freely used under Attribution-ShareAlike license, unless stated otherwise. Cite this article:
BBC Television Centre Facts for Kids. Kiddle Encyclopedia.