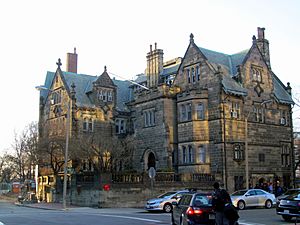 The Boston University Castle (or BU Castle or simply "The Castle") is a Tudor Revival-style mansion owned by Boston University on Bay State Road. The school typically uses it for receptions or concerts, but also rents out The Castle to cater events and special occasions. 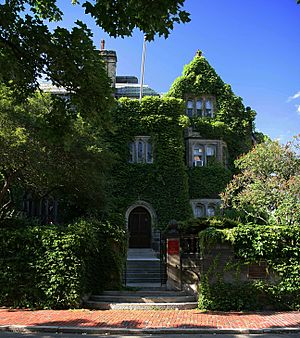 The Castle covered in ivy

The building was cited by architectural historian Bainbridge Bunting in his Houses of Boston's Back Bay as displaying “the most convincing medieval effect of the area.”

According to Boston University, the building's founder, William Lindsey, would have been pleased by this description. Lindsey had derived his inspiration for the Castle from the great manor houses of Tudor England. "The imposing style of these medieval mansions held a special allure for Lindsey, who, besides being a successful businessman, was also a poet and playwright. His writings, such as The Severed Mantle: A romance of medieval Provence and The Red Wine of Roussillon, a blank-verse drama set in France during the Middle Ages, reveal the same fascination with the antique and the romantic that pervades the design of the Castle."

The Castle was originally built as a residence for William Lindsey (1858–1922), a prominent Boston businessman who made his fortune with a patented cartridge belt the British Army used during the Boer War. Plans were drawn up in 1904 and construction was completed in 1915 at a cost of more than $500,000.

Shortly after the building's completion, Lindsey's eldest daughter was married in the mansion, though she and her groom would later be killed while on their honeymoon, aboard the ill-fated Lusitania after the ship was torpedoed by a German submarine just off the coast of County Cork. The grief-stricken Lindsey later constructed the magnificent Leslie Lindsey Memorial Chapel in Emmanuel Church on Newbury Street in his daughter's memory. 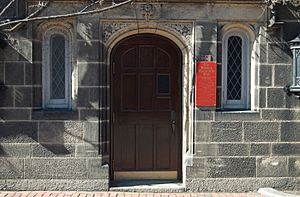 The BU Pub on the side of the Castle

In the basement of the BU Castle is the BU Pub, an English-style pub serving drinks and sandwiches. The Castle is the only Boston University-operated drinking establishment on campus. It is open only to faculty, staff, alumni, students, and invited guests, and is closed on weekends.

All content from Kiddle encyclopedia articles (including the article images and facts) can be freely used under Attribution-ShareAlike license, unless stated otherwise. Cite this article:
BU Castle Facts for Kids. Kiddle Encyclopedia.