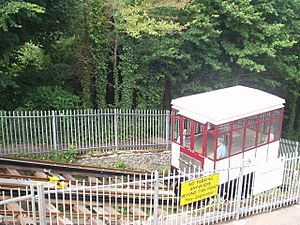 A car of the cliff railway 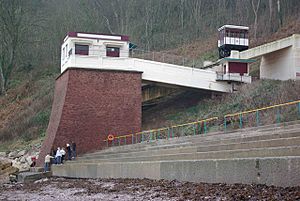 The lower station of the cliff railway

Babbacombe Cliff Railway, also known as the Babbacombe Cliff Lift, is a funicular railway in the town of Torquay in the English county of Devon. It links Babbacombe Downs with Oddicombe Beach. The line runs every day, with a closure period in winter for maintenance. The first car runs at 09:30, and the last at 17:30. A bell is rung 30 and 15 minutes before closing.

In February 1923, the Torquay Tramway Company commissioned Waygood-Otis Ltd with the engineering and construction of the railway. Construction started in 1924, and the line was first opened on 1 April 1926. The line cost £15,648 to construct. The tramway company continued to work the line until 13 March 1935, when it was taken over by Torquay Borough Council. The line was closed in 1941, due to World War II security restrictions, and reopened in 1951 after modernisation by Messrs J & E Hall of Dartford. The railway underwent further refurbishment in 1993 and a three-year programme of renovation commenced in November 2005.

In July 2009, the ownership of the line was transferred from Torbay Council, who had inherited ownership from Torquay Borough Council as a result of local government reorganisation, to a specially created community interest company. In 2019, the CIC converted to become a Charitable Incorporated Organisation.

All content from Kiddle encyclopedia articles (including the article images and facts) can be freely used under Attribution-ShareAlike license, unless stated otherwise. Cite this article:
Babbacombe Cliff Railway Facts for Kids. Kiddle Encyclopedia.