Back Cove (Maine) facts for kids 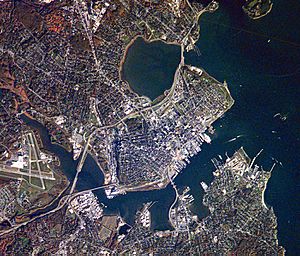 Back Cove (top) as seen in NASA astronaut photograph.

Back Cove is an estuary basin on the northern side of the City of Portland, Maine's downtown district. It is nearly circular and about one mile in diameter. Baxter Boulevard, a popular loop trail, runs around the circumference of the cove. Being tidal, Back Cove dries out to mud flats at low tide and is not commercially navigable. It is sometimes incorrectly referred to as Back Bay. Its mouth is crossed by Interstate 295 on Tukey's Bridge. 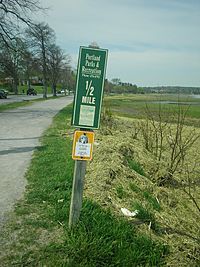 A distance marker on the western side of Baxter Boulevard.

All content from Kiddle encyclopedia articles (including the article images and facts) can be freely used under Attribution-ShareAlike license, unless stated otherwise. Cite this article:
Back Cove (Maine) Facts for Kids. Kiddle Encyclopedia.