Backe, backe Kuchen is a popular German language children's rhyme. The original was in Saxony and Thuringia with several textual versions from 1840. 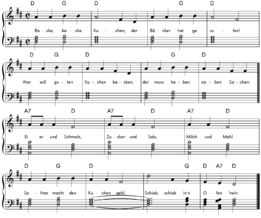 The melody musically structures the text in the way of bar form. The framing lines follow a conventional four-bar period, where only the melodic variation in the postscript of the reprise (i.e. in the last two bars) enlivens the otherwise rather monotonous course. However, the symmetry of these run counter to the bars of the sung "middle part". This irregularity is common in folk songs when 'litany-like " prose texts are set to music. Familiar songs that use this effect are significantly stronger than that with a relatively simple three-bar song, examples like Backe, backe Kuchen include Der Bauer schickt den Jockel aus [de] or the Christmas carol The Twelve Days of Christmas.

The text records what was probably a common practice when composed. That is to say, the bakers after baking bread called with a horn to signal to the women of the neighborhood, that the residual heat of the oven could now be used to bake the women's own cakes. Also, where the bread was baked on certain days in the common village oven, there was a signal when the bread was removed and the residual heat of the oven could be used for baking cakes.

It is striking that the text points to the yellow coloring effect of saffron. None of the other six mentioned ingredients provides an obvious rhyme word for the German standard "gelb" which means yellow. Therefore, the traditional lyric writes "gehl" (also known as "gel") to provide a plausible approximate rhyme to "Mehl" which means meal or flour. There are Upper German dialects, such as the Northeast Bairische which soften the plosive -b to a -w, so it was eventually not heard or was no longer spoken. Furthermore, "geel" is a Low German and Dutch word for "yellow".

The line "sugar and salt" is sometimes replaced by "butter and salt."

The last line is added only in some variants, as the text is sung translated into Standard German as "Schieb ihn in den Ofen rein".

All content from Kiddle encyclopedia articles (including the article images and facts) can be freely used under Attribution-ShareAlike license, unless stated otherwise. Cite this article:
Backe, backe Kuchen Facts for Kids. Kiddle Encyclopedia.