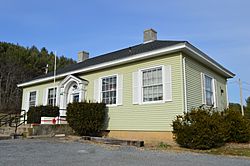 Bacova is an unincorporated community in Bath County, Virginia, in the United States. It was created in the early 20th century as a company town; its name is simply an abbreviation of Bath County, VA.

Hidden Valley was listed on the National Register of Historic Places in 1970.

The climate in this area has mild differences between highs and lows, and there is adequate rainfall year round. According to the Köppen Climate Classification system, Bacova has a marine west coast climate, abbreviated "Cfb" on climate maps.

All content from Kiddle encyclopedia articles (including the article images and facts) can be freely used under Attribution-ShareAlike license, unless stated otherwise. Cite this article:
Bacova, Virginia Facts for Kids. Kiddle Encyclopedia.