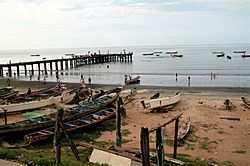 Bakau is a town on the Atlantic coast of Gambia, west of Gambia's capital city of Banjul. It is known for its botanical gardens, its crocodile pool Bakau Kachikally and for the beaches at Cape Point. Bakau is the first major suburb outside Banjul and the most developed town in the Gambia. It is close to Bakau and Banjul is Gambia's largest city, Serekunda. In 2013, 43,098 people lived there.

All content from Kiddle encyclopedia articles (including the article images and facts) can be freely used under Attribution-ShareAlike license, unless stated otherwise. Cite this article:
Bakau Facts for Kids. Kiddle Encyclopedia.