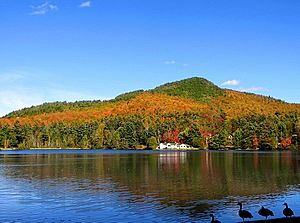 Baker Mountain is a 2454-foot mountain in Essex County, New York east of Saranac Lake. It is part of the McKenzie Mountain Wilderness Area. The trail to the top is about 0.9-miles long; the hike is part of the "Saranac Sixer." Moody Pond lies at its foot.

It is one of three small mountains surrounding Saranac Lake: the others are Mount Pisgah and Dewey Mountain.

The first recorded ascent of Baker Mountain on skis was made by Edwin R. Stonaker on March 11, 1916.

In the prohibition era, the Mt. Baker Club was a speakeasy at the foot of the mountain.

All content from Kiddle encyclopedia articles (including the article images and facts) can be freely used under Attribution-ShareAlike license, unless stated otherwise. Cite this article:
Baker Mountain (New York) Facts for Kids. Kiddle Encyclopedia.