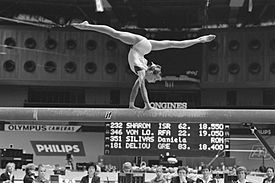 The balance beam is a rectangular artistic gymnastics apparatus, as well as the event performed using the apparatus. Both the apparatus and the event are sometimes simply referred to as "beam". The English abbreviation for the event in gymnastics scoring is BB. The beam is a small, thin beam which is typically raised from the floor on a leg or stand at both ends. The balance beam is only performed by female gymnasts. Beams are usually covered with leatherlike material, and are only 4 inches wide.

While learning new skills, gymnasts often work on floor beams that have the same dimensions and surface of regulation apparatus, but are set a very short distance from or on the ground. They may also work on medium beams, mini beams, road beams, or even lines on a mat.

Originally, the beam surface was plain polished wood. In earlier years, some gymnasts competed on a beam made of basketball-like material. However, this type of beam was eventually banned due to its extreme slipperiness. Since the 1980s, beams have been covered in leather or suede. In addition, they are now also sprung to accommodate the stress of high-difficulty tumbling and turns and poses.

All content from Kiddle encyclopedia articles (including the article images and facts) can be freely used under Attribution-ShareAlike license, unless stated otherwise. Cite this article:
Balance beam Facts for Kids. Kiddle Encyclopedia.