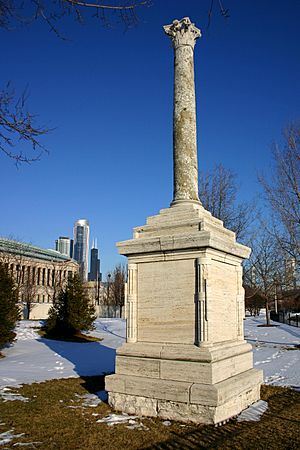 The Balbo Monument in Burnham Park (as pictured on February 19, 2010).

The Balbo Monument consists of a column that is approximately 2,000 years old dating from between 117 and 38 BC and a contemporary stone base. It was taken from an ancient port town outside of Rome by Benito Mussolini and gifted to the city of Chicago in 1933 to honor the trans-Atlantic flight led by Italo Balbo to the Century of Progress Worlds Fair.

The Balbo Monument includes a column that was taken from a site about 200 meters outside of Porta Marina in Ostia. The building that the column originated from is called the Prospetto a Mare which translates to the Prospectus to Sea. Due to extensive renovation that was done during the second century AD, many of the buildings throughout the settlement of Ostia were repurposed or built over. Although this building endured through years of change and innovation, there are very few records still in existence that pertain to the building's original purpose. 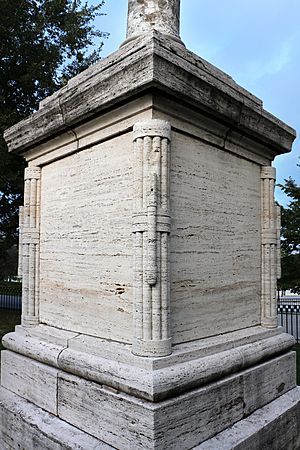 The axes have been removed from the Fasces

The Romans constructed the column from breccia, a type of stone created from the combination of angular gravel and the fragments of boulders. The pillar is a greenish color, thirteen feet tall and three feet in diameter. Two Italian architects named Capraro and Komar created the base of the monument out of travertine, a type of light colored limestone frequently used in Roman architecture. They inscribed a message in Italian. In English the message reads:

This column
twenty centuries old
erected on the beach of Ostia
port of Imperial Rome
to safeguard the fortunes and victories
of the Roman triremes
Fascist Italy, by command of Benito Mussolini,
presents to Chicago
exaltation, symbol, memorial
of the Atlantic Squadron led by Balbo
that with Roman daring flew across the ocean
in the 11th year
of the Fascist era.

All content from Kiddle encyclopedia articles (including the article images and facts) can be freely used under Attribution-ShareAlike license, unless stated otherwise. Cite this article:
Balbo Monument Facts for Kids. Kiddle Encyclopedia.