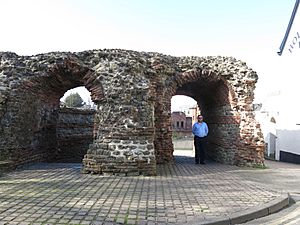 The Balkerne Gate, Colchester, with man in for scale

Balkerne Gate is a 1st-century Roman gateway in Colchester. It is the largest surviving gateway in Roman Britain and was built where the Roman road from Londinium intersected the town wall. It is a Grade I listed building.

The gate, which is the best-preserved Roman gateway in the country, was built c. AD 70–96. The gatehouse, which originally had two main arched passageways with separate arched footways on both sides, has largely disappeared. The remaining gateway which we see today is the south-side arched footway; however, the remains of a guard tower are also visible. From The Balkerne Gate, Colchester by R.E.M. Wheeler (1920):

Roman town gates sometimes had as many as three entrances but were usually limited to one or two. The Balkerne Gate, however, had four gates, and unusually wide carriageways.

There are no other quadruple gates in Britain but there are a few elsewhere in Europe; for example, the Porte d'Auguste at Nîmes, the Porte Ste. André and the Port d'Arroux at Autun, and the Palatine Towers at Turin.

All content from Kiddle encyclopedia articles (including the article images and facts) can be freely used under Attribution-ShareAlike license, unless stated otherwise. Cite this article:
Balkerne Gate Facts for Kids. Kiddle Encyclopedia.