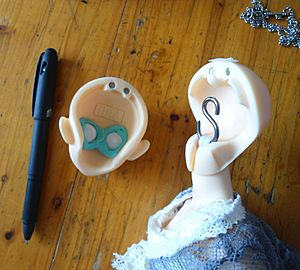 A ball-jointed doll is a doll that is can have its arms and legs moved because of a ball joint. During the 1930, artist Hans Bellmer, made dolls that had ball-joints and used them in photography. In 1980, Japanese traditional doll artists used ball joints with dolls. In 1999, Japanese doll company, Volks, popularized the ball-jointed doll made of urethane.

The main feature of the ball-jointed doll is its joints. These joints are round and can be taken apart. So you can assemble the joints and body parts to make a doll. There are double-joints and triple joints that can make doll more delicate.

The eyes, wigs, clothes and make-up on the dolls can be changed and people can design their 'own' doll.

All content from Kiddle encyclopedia articles (including the article images and facts) can be freely used under Attribution-ShareAlike license, unless stated otherwise. Cite this article:
Ball-jointed doll Facts for Kids. Kiddle Encyclopedia.