There are various types of traditional dolls, some representing children and babies, some the imperial court, warriors and heroes, fairy-tale characters, gods and (rarely) demons, and also people of the daily life of Japanese cities. Many have a long tradition and are still made today, for household shrines, for formal gift-giving, or for festival celebrations such as Hinamatsuri, the doll festival, or Kodomo no Hi, Children's Day. Some are manufactured as a local craft, to be purchased by pilgrims as a souvenir of a temple visit or some other trip. 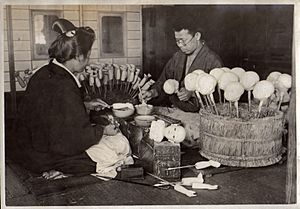 There may be a continuity in the making of the dogū, humanoid figures, by the ancient Jōmon culture in Japan (8000–200 BC) and in the Haniwa funerary figures of the subsequent Kofun culture (around 300–600 AD). Expert Alan Pate notes that temple records refer to the making of a grass doll to be blessed and thrown into the river at Ise Shrine in 3 BC; the custom was probably even more ancient, but it is at the root of the modern doll festival or Hinamatsuri.

In the early eleventh century, around the peak of the Heian period, several types of dolls had already been defined, as known from Lady Murasaki's novel The Tale of Genji. Girls played with dolls and doll houses; women made protective dolls for their children or grandchildren; dolls were used in religious ceremonies, taking on the sins of a person whom they had touched.

Hōko, though not explicitly mentioned in The Tale of Genji, were soft-bodied dolls given to young women of age and especially to pregnant women to protect both mother and unborn child. Sources mentioning them by name start appearing in the Heian period, but are more apparent in the Muromachi period.

Okiagari-koboshi are roly-poly toys made from papier-mâché, dating back to at least the 14th-century. They are good-luck charms and symbols of perseverance and resilience.

Probably the first professional dollmakers were temple sculptors, who used their skill to make painted wooden images of children (Saga dolls). The possibilities of this art form, using carved wood or wood composition, a shining white "skin" lacquer called gofun made from ground oystershell and glue, and textiles, were vast.

During the Edo period (about 1603–1867), when Japan was closed to most trade, there developed both fine dollmakers and a market of wealthy individuals who would pay for the most beautiful doll sets for display in their homes or as valuable gifts. Sets of dolls came to include larger and more elaborate figures, and more of them. The competitive trade was eventually regulated by government, meaning that doll makers could be arrested or banished for breaking laws on materials and height.

It was during the Edo period that most of the traditional dolls developed.

Hinamatsuri dolls of the emperor and empress 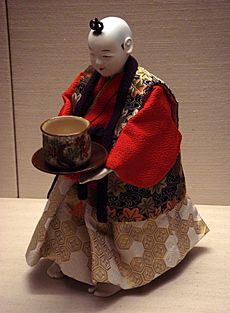 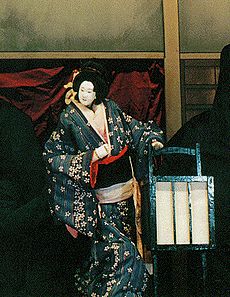 Bunraku puppet during a play 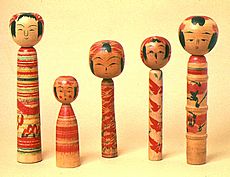 With the end of the Edo period and the advent of the modern Meiji era in the late 1800s, the art of doll-making changed as well. 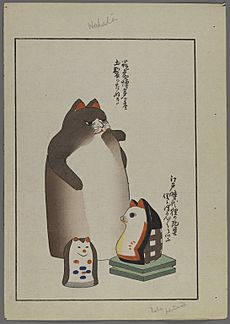 Animal dolls, illustrated by Shimizu Seifū from his collection (1893–1923)

Japanese dolls are broken down into several subcategories. Two of the most prominent are Girl's Day, hina-ningyo, and the Boy's Day musha-ningyo, or display dolls, sagu-ningyo, gosho-ningyo, and isho-ningyo. Collections can be categorized by the material they are made of such as wood dolls kamo-ningyo and nara-ningyo and, clay forms such as Fushimi ningyo, Koga ningyo, and Hakata ningyo.

In the nineteenth century ningyo were introduced to the West. Doll collecting has since become a popular pastime in the West. Famous well known collectors from the West include individuals such as James Tissot (1836–1902), Jules Adeline (1845–1909), Eloise Thomas (1907–1982), and Samuel Pryor (1898–1985). James Tissot was known to be a religious history painter. In 1862, after attending a London Exhibition, he was drawn to Japanese art. During the 1860s, Tissot was known as one of the most important collectors of Japanese art in Paris. His collections included kosode-style kimonos, paintings, bronze, ceramics, screens and a number of bijin-ningyo (dolls from late Edo period). Adeline was known as a working artist and he is also known as "Mikika". Adeline produced many works throughout his career as a working artist. He is best known for his etchings and received the Cross of the Legion of Honor for his Vieux-Roven "Le Parvis Notre-Dame". Unlike Tissot, Adeline is recognized as a true collector. A majority of Adeline's collection consisted of ningyo, and only a few prints.

During the Meiji period, three men became pioneers in collecting ningyo, Shimizu Seifū (1851–1913), Nishizawa Senko (1864–1914), and Tsuboi Shōgorō (1863–1913). The three men are referred to as "Gangu San Ketsu" (the three great toy collectors). They introduced a systematic approach to collecting ningyo in an effort to preserve and document the various forms of ningyo. Shimizu, an artist and calligrapher, put his artistic ability to use by creating an illustrated catalog of his own collection of 440 ningyo dolls. The catalog was published in 1891, under the title Unai no Tomo. Nishizawa, a banker, gathered a significant collection on hina-ningyo. He was an active researcher, collector of stories, documents, and information relating to the development of hina-ningyo during the Edo period. Nishizawa's son Tekiho (1889–1965) inherited his collection but a great portion of the collection was lost in the Kanto earthquake of 1923. Tsuboi, founder of the Tokyo Anthropological Society, was the most trained of the three, and he brought a scientific element to the collecting of ningyo. Dolls have been a part of Japanese Culture for many years, and the phenomenon of collecting them is still practiced. Many collections are preserved in museums, including the Peabody Essex Museum, Kyoto National Museum, and the Yodoko Guest House.

All content from Kiddle encyclopedia articles (including the article images and facts) can be freely used under Attribution-ShareAlike license, unless stated otherwise. Cite this article:
Japanese dolls Facts for Kids. Kiddle Encyclopedia.