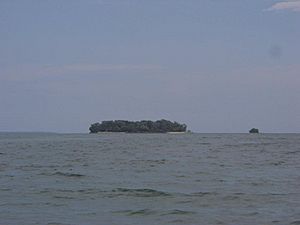 Ballast Island is a small, 4.89 km² private island in Lake Erie, about one-quarter mile (0.4 km) northeast of the northeast tip of South Bass Island. It is known primarily as a navigation point for boats going to or from Put-in-Bay from the east. There are shoals between Ballast and South Bass, but there is a passage between known locally as "the wagon tracks".

Ballast Island received its name when commodore Oliver Hazard Perry used rocks from this island, according to legend, to ballast his ships.

George William Gardner purchased Ballast Island from Lemuel Brown in 1874 according to Ottawa County Records. The deeds show that Brown acquired the island from Joseph de Rivera St. Jurgo in 1869. Lemuel Brown was a half-breed Erie Indian who had married the daughter of the chief of the Erie Indians who claimed all the islands.

Commodore Gardner was a well-known Clevelander who served as Mayor from 1886-1890. He founded the Cleveland Yacht Club in 1878 and served as Commodore until 1895. He also organized the Inter Lake Yachting Association in 1884 and was its commodore until 1894. The Greater Cleveland Sports Hall of fame honored him in 1981.

After completing his purchase of Ballast, Commodore Gardner sold to his friends, including Henry Corning, Will Claflin and Civil War General James Barnett, undivided interests with the right to build a cottage. The island then became a cooperative association of wealthy families. During the late 19th and early 20th centuries, Ballast Island flourished. A large hotel and dining hall were constructed high on the cliffs of the north side of the island. A windmill supplied water and carbide lanterns supplied light. During this time many cottages were built around the east and west shores along with the Gardner Log Cabin. Over the years the Gardner family has lived in this log house, including George W., his son George Henry, Kenneth and Constance Gardner, and currently the daughter of Ken and Constance. During the 1890-early 1900 time span the southeast corner of Ballast facing Buckeye Point on South Bass was adorned by a boat house. This boat house served as the headquarters for the Longworth Canoe club. The canoe club was named after Nicholas Longworth, who was the father-in-law of Theodore Roosevelts's daughter, Alice. Presidents Theodore Roosevelt, William McKinley, James Garfield and Grover Cleveland all have visited Ballast.

During the depression years, Ballast was not used as often because of the expense. In the 1930s and 1940s the steamers Goodtime, Put-in-Bay, and Chippewa brought friends to the island, and Ballast once again flourished. In the 1950s, several owners died but the partition deed that was in place, held. This was because one of the original signers, Constance "Kiki" Gardner was still living.

In 1958 one of Kiki's daughters, Constance Gardner Moore offered to buy Roseanne Gilmore's property. The offer was accepted and the Moore family became part owners of Ballast Island. At the same time two other sections of Ballast Island were for sale. They were purchased by a Cleveland businessperson.

All content from Kiddle encyclopedia articles (including the article images and facts) can be freely used under Attribution-ShareAlike license, unless stated otherwise. Cite this article:
Ballast Island Facts for Kids. Kiddle Encyclopedia.