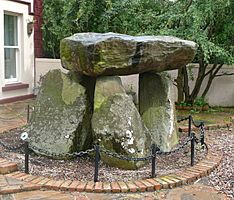 Ballylumford Dolmen is situated on Islandmagee, County Antrim, Northern Ireland, near the north-west tip of the Islandmagee peninsula and near Ballylumford power station. It is known locally as the "Druid's Altar", and could be 4000 years old, or the remains of an even earlier passage grave. The dolmen consists of four upright stones, with a heavy capstone and a fallenstone within the structure. This may have been put there to block the entrance to the tomb. The dolmen is in the front garden of a house. Historical artifacts have been recovered from under the dolmen by archaeologists and it would appear to have stood over a burial chamber from ancient times. It is situated on the B90 road between Mill Bay and Ballylumford. A wall plaque at the site describes the dolmen as a single chambered grave erected about 2000-1600 BC. Local finds indicate occupation of the neighbourhood during the Bronze Age. 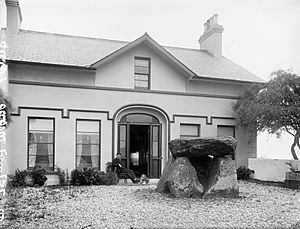 Ballylumford Dolmen is a portal tomb and a State Care Historic Monument in the townland of Ballylumford, in Larne Borough Council area at grid ref: D4304 0160.

All content from Kiddle encyclopedia articles (including the article images and facts) can be freely used under Attribution-ShareAlike license, unless stated otherwise. Cite this article:
Ballylumford Dolmen Facts for Kids. Kiddle Encyclopedia.