Balmoral Park is an equestrian facility located just south of Crete, Illinois, United States. It operated from 1926 to 2015 as a horse racing track. It reopened in 2017 as a horse show facility under the same name.

Colonel Matt Winn, manager of Churchill Downs, came to Chicago in 1925 to look over the Illinois racing situation. Winn returned to Kentucky, where he talked to business associates at the Kentucky Jockey Club. They agreed to buy 1,050 acres (4.2 km2) just south of Crete to build the new track, which would be named "Lincoln Fields." The large oval was surrounded by Kentucky bluegrass which Winn imported from that state. Red Spanish tile was used as roofs on the buildings. Spring-fed lakes were built in the infield.

The inaugural meeting at Lincoln Fields began on August 9, 1926. The first trainer to stable on the grounds was thoroughbred horseman Daniel E. Stewart, the trainer for Senator Johnson Camden, president of the Kentucky Jockey Club. The first horse to work out was Camden's mare Rothermel. Miss Rosedale won the first race contested. The inaugural card featured the $5,000 Joliet Stakes for 2 year-old colts and geldings. The certificate system of wagering was used since pari-mutuel wagering was not made legal in Illinois until July 1, 1927.

On August 30, 1936, Lincoln Fields installed the DeBrie Camera at the finish line. This instrument recorded 240 pictures per second, and was the first such camera to be installed at an Illinois racetrack. The mighty Whirlaway won his first career race at Lincoln Fields on June 3, 1940, and later went on to win the coveted Triple Crown the following year.

During renovations for the 1952 season, a fire in the grandstands damaged Lincoln Fields and prevented its re-opening. The 1952–53 race meetings were once again shifted to Hawthorne Race Course. But in 1954, thoroughbred racing returned to the Crete homegrounds and Lincoln Fields celebrated its first running since 1942. 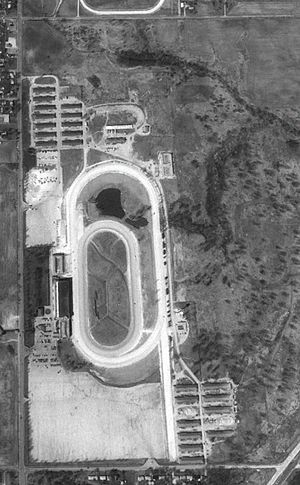 On June 5, 1960, Lindheimer died and was quickly succeeded by his adopted daughter, Marjorie Lindheimer Everett. Everett then consolidated Washington and Arlington Parks as divisions of a new corporation called Chicago Thoroughbred Enterprises (CTE), which also owned Balmoral Park. In 1964, Balmoral's thoroughbred race meetings were moved to Arlington Park, where it remained for six years.

William S. Miller, a self-made millionaire and horse breeder, and his partners purchased Balmoral Park in 1967. Miller had been a member of the Illinois Racing Board from 1951 to 1967 and also served as Board Chairman. Miller converted Balmoral's thoroughbred track to a half-mile track for harness racing. At that time, the Cook County harness racing season was limited to March through November. However, since Balmoral Park was located in neighboring Will County, the limitation did not apply and Balmoral was permitted to hold harness racing during the winter months.

Early in 1987, Balmoral Park was sold to the family of George Steinbrenner, owner of the New York Yankees, and a group of local track operators headed by Billy Johnston and his sons John and Duke. That same year, Illinois became the first state to permit race tracks to own and operate off-track betting facilities. Balmoral Park opened Illinois' first OTB parlor, located in Peoria on September 8, 1987.

Race to the top

On June 26, 1988, Balmoral Park hosted North America's first World Driving Championship, which originally began in Germany in 1972. The contest is conducted every four years to coincide with the Summer Olympics. Drivers from 14 countries participated, with Oddvar Maeland of Norway and Jans Stampp of Germany emerging as victors.

Soon after, a new one-mile (1.6 km) racing strip was built around the existing 5/8's mile oval. But in 1991, the Illinois Racing Board took away the racetrack's thoroughbred dates, making Balmoral Park an exclusive harness racing facility.

By 1993, Balmoral Park became a national leader in the use of standardized saddle pads. These pads made it easier for bettors to identify their wagering selections. Over the next few years, Balmoral held several races in conjunction with the World Driving Championships hosting drivers from 16 countries. Local driving star Dave Magee won the competition in 1995.

The 5⁄8 mile track was eliminated that year, but a state-of-the-art lighting system was installed on the one-mile (1.6 km) oval. On June 1, full-card simulcast wagering was introduced. In 1996, improvements continued and construction of a new receiving barn and paddock adjacent to the grandstand was completed. Balmoral Park could now accommodate 120 horses, the number of horses run each night.

A notable addition to Balmoral Park was made in the form of a circular walking ring under the shade trees near the paddock, similar to the one at Saratoga Race Course in Saratoga Springs, New York. This pastoral area was well-lighted and ideal for horses to walk and cool out.

Perhaps most famously, The Great Midwest Fair, re-inaugurated the same year, continued with its presentation of fun, food, games, fireworks, entertainment and live horse-racing to more than 25,000 patrons. The annual three-day event was held over Memorial Day weekend.

The End of an Era

On January 25, 2014, harness racing ambassador and longtime supporter of Balmoral Park, Tony Maurello, died at age 93. The Tony Maurello Winner's Circle was dedicated in his honor on September 13 of the same year, during the 2014 Super Night festivities.

In 2015, the shocking news was made public that the racetrack was slated for closure at the end of the year. The closure was the result of a financial burden from a United States Court of Appeals ruling that Illinois racetracks had to pay casinos restitution.

The track has a one-mile (1.6 km) dirt oval. Its grandstands are capable of seating at least 71,000 spectators. There is stabling on the backstretch for over 900 horses. In its heyday, Balmoral's stalls were regularly at or near capacity.

The following stakes were held at Balmoral Park:

Metra train service was first proposed in 2006 to provide commuter rail access to Chicago's southern and far southern suburbs, including Balmoral Park. The Alternatives Analysis for the SouthEast Service line was completed in 2010 and specified a southern terminus at a proposed station near the racetrack. The SouthEast Service would carry commuters between Balmoral Park and Chicago using the Union Pacific/CSX right-of-way adjacent to the racetrack as its south branch while its north branch would be shared with rail currently used by the Rock Island Line.

The SouthEast Service has a total of 13 proposed stations to serve Balmoral Park and the South and Far South Suburbs:

Services to Gresham, Bronzeville and LaSalle Street Station would be shared with the Rock Island Line to take advantage of existing infrastructure as well as provide easy access to Chicago's Downtown Loop and its CTA public transit system.

The SouthEast Service has lost much of its momentum in recent years and while the project faces a number of financial and political obstacles, the prospect of seeing a completed commuter rail service for Chicago's far south suburbs remains uncertain.

All content from Kiddle encyclopedia articles (including the article images and facts) can be freely used under Attribution-ShareAlike license, unless stated otherwise. Cite this article:
Balmoral Park, Illinois Facts for Kids. Kiddle Encyclopedia.