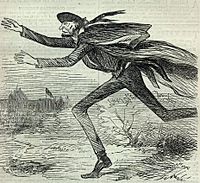 A political cartoon criticizing Lincoln in 1862

The Baltimore Plot was a plan by pro-slavery owners in late February 1861 to assassinate President-elect of the United States Abraham Lincoln. The plan was to kill Lincoln while he was on his way to his inauguration.

Allan Pinkerton, founder of the Pinkerton National Detective Agency, played a key role by being in charge of Lincoln's security throughout the journey. Though scholars debate whether or not the threat was real, clearly Lincoln and his advisors believed that there was a threat and took actions to make sure he traveled safely through Baltimore, Maryland. This was where Lincoln's plotted assassination would have happened.

Lincoln arrived secretly in Washington, D.C. on February 23, 1861. A planned train route through Bellaire, Ohio, to Wheeling, Virginia (West Virginia had yet to break off from Virginia) and eastward, was redirected up through the Pittsburgh through Pennsylvania, into Maryland and eventually to Washington.

For the remainder of his presidency, Lincoln's many critics would call him a coward because he was in disguise while travelling secretly to Washington.

All content from Kiddle encyclopedia articles (including the article images and facts) can be freely used under Attribution-ShareAlike license, unless stated otherwise. Cite this article:
Baltimore Plot Facts for Kids. Kiddle Encyclopedia.